Congratulations are in ord 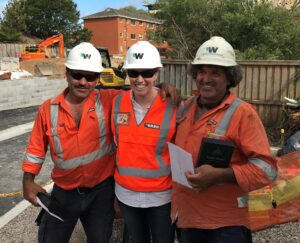 er for two of Wards longest standing staff members, George Mouzourakis and Harry Vavlas, for their impressive and excellent service over the years!

George has been with Wards since 2006, marking his 11th year just a one month ago. He has worked as a Labourer and Leading Hand on various projects over the years including Royal North Shore Hospital & Sydney Light Rail.  This Greece-grown legend is one sweet talker making him very popular amongst the ladies at Ward.  That’s no surprise though, I mean… check out that hair!

Harry’s been around for even longer!  Harry first started with us a mere 31 years ago in 1985.  He then left us in 1988 for what he thought were greener pastures, but like so many others, Harry made his way back to Ward in 1995.  We’re thrilled that he has remained with us for the past 22 years.  Harry has worked on so many Ward projects over the last two decades … I’d be typing for far too long to list them all.  He’s described by his colleagues as tremendously loyal, even helping our founder, Peter Ward, work on his family home in Vaucluse back in the day.

Harry and George – on behalf of Ward, we say thank you for the hard work, dedication, and loyalty you’ve demonstrated over the years.  We look forward to the many more good times ahead!